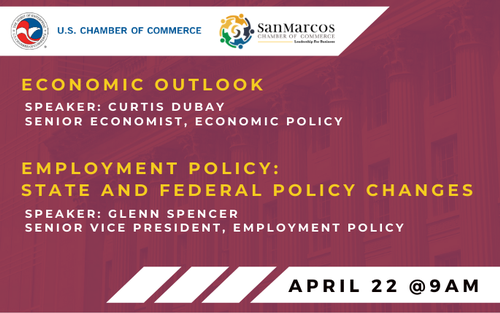 Topic: Economic Outlook
Curtis Dubay
Senior Economist, Economic Policy
U.S. Chamber of Commerce
Curtis Dubay is the Lead Economist at the U.S. Chamber of Commerce. Prior to that he was Senior Economist at the American Bankers Association and Research Fellow in Tax and Economic policy at The Heritage Foundation. He has also worked at the accounting firm PwC and the Tax Foundation.
Dubay has researched and published frequently on a wide range of tax and economic issues. He is frequently quoted by the press and has appeared regularly in the media, including on CNBC, Fox News, Fox Business, MSNBC, CNN and C-SPAN. He has testified before Congress several times and was cited in newspapers such as The Wall Street Journal, The New York Times, The Washington Post, USA Today, and Politico.
Topic: Employment Policy: State and Federal Policy Changes
Glenn Spencer
Senior Vice President, Employment Policy
U.S. Chamber of Commerce
Glenn Spencer is the senior vice president of the Employment Policy Division,
which represents the interests of the employer community across a range of labor and employment issues. The division works to ensure that laws and regulations affecting employers are developed with employer concerns acknowledged and are fairly applied. It also provides businesses with guidance and expertise on legislative and regulatory matters.
Before joining the Chamber in July 2007, Spencer spent nearly six years at the
U.S. Department of Labor in the Office of the Secretary, serving as the deputy chief of staff and then chief of staff to Secretary of Labor Elaine L. Chao.
Location:
Zoom link provided upon registration
Date/Time Information:
Date: Thursday, April 22, 2021 Time: 9:00 a.m. – 10:00 a.m.
Contact Information:
(760)744-1270
Send an Email
Business Directory News Releases Events Calendar Daily Deals Member2Member Classifieds Job Postings Contact Us Weather Join The Chamber